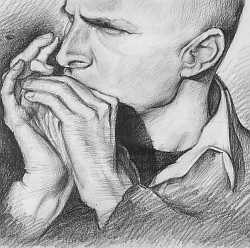 I was introduced to harmonica as an undergraduate at Yale in the 1970’s. Jim Fitting, a well known Boston based player (Treat Her Right), was there, and captivated me and everyone else with his amplified harmonica style. I bought a harmonica, and got started.

Phil Bloch, the Vermont based fiddler, was also there, and introduced me to bluegrass. Back then it was hard to find harmonica lessons. A key early influence then (and now) was my brother Quentin Eyers, a very fine guitar player, music producer and recording engineer.

I returned to Australia in the early 1980’s, and started playing harmonica in electric blues bands. I formed the Full House Blues Band, which became well known in Adelaide, with a weekly residency at the Britannia Hotel. Sadly, the room we played in is now full of poker machines.

I moved to Sydney at the end of the 1980s, where post graduate studies interrupted my music for a while. I returned to the harmonica in the mid 1990s, and was drawn to acoustic music. My friend John Bridgland introduced me to bluegrass fiddle tunes. I’d tried learning these on harmonica some years before, using 1st position, but found it too hard. This time I tried a variety of tunings to make things easier, before devising Major Cross, the tuning I use now. In 2017 the Seydel harmonica company released a Major Cross version of their Session Steel harmonica model. I’m a proud endorser of Seydel harmonicas.

In 2003 I released my first CD, Black Mountain Harmonica, featuring traditional tunes played on Major Cross harmonicas. This CD did well, I ended up as a judge at the Asia Pacific Harmonica Festival, and played at Asian festivals and SPAH, the big US harmonica convention. In 2021 I released my second CD O’Carolan’s Harmonica

Along with the harmonica, I have a strong interest in baroque recorder. This began in Washington DC the year after graduation, following on from choral group singing at Yale, directed by Chris Zimmerman. I now perform regularly on recorder with Balmain Baroque, a baroque group I formed in 1995 with Amanda Muir. We are a five piece ensemble, with concerts based around Amanda’s singing. The baroque training has greatly influenced my harmonica style. I am also fortunate to have been taught by Hans-Dieter Michatz, who provided deep insight into baroque styles, and musical performance.

I have also created an English language harmonica site called Harmonica Academy, which provides online harmonica lessons. If you are interested in learning, please visit this site.