Harmonica History – From China to the Blues 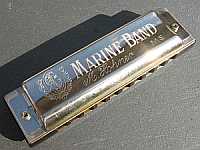 The harmonica has a long history, beginning in China with an instrument called the Sheng. The harmonica was further developed in Europe early in the 19th century, with the first harmonicas manufactured in Germany. The best known harmonica company, Hohner, is still based in Germany.

Matthias Hohner introuduced the harmonica to 19th century America, which really began the modern history of the harmonica. The harmonica was cheap and easy to carry, perfect for a country on the move, like America back then. While there were many harmonica types, the most widely used harmonica (at least in Western countries) became the 10 hole "diatonic", as shown in the picture.

It is called "Billy in the Lowground", played by me. Visit the harmonica links page to hear harmonica music from many great players, and learn more about its tradition and history.

How is it put together?

In Western countries the most commonly used harmonica has 10 holes, as shown above. Each hole has two metal reeds inside it. When you blow into a hole, one of the reeds vibrates and produces a sound (or note). When you breathe in, the other reed in the hole vibrates, and produces a different note. So, each hole can produce two notes. There are 10 holes, and therefore 20 notes. Actually you can produce more than 20 notes. 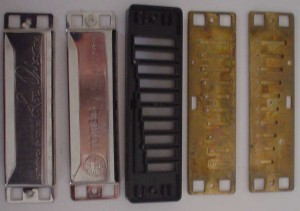 The harmonica has five main parts. These are the two outer cover plates, two brass reed plates, each holding 10 reeds, and the "comb", usually made from plastic or wood, which has the holes. These 5 parts are held together with screws. If the screws are removed, the parts look like this.

The harmonica is common in Western music. In the past, harmonica bands, with many harmonica players were popular. These days, the harmonica is usually associated with blues. Most people who learn harmonica want to play blues, and for good reason … it is tremendous fun. The harmonica is also widely used in folk music, with Bob Dylan a well known exponent. In recent years, players such Howard Levy and Brendan Power have developed new and exciting harmonica styles.

Please note however: Because the harmonica is a relatively cheap instrument, many people think that serious musicians do not play it. This is not true. Like any instrument, the harmonica has many world class players, who play unique and beautiful music.

History of the Harmonica

The harmonica was first invented in China, a few thousand years ago. This instrument, called the "Sheng", had bamboo reeds, and became a prominent instrument in Asian traditional music. The Sheng was introduced to Europe in the late 18th century, and soon became popular.

Mass production of harmonicas began in Vienna in 1829. Harmonicas were soon produced in other cities as well. In Trossingen, a village in Germany, Christian Messner and his cousin Christian Weiss began producing harmonicas in their spare time (their main craft was clockmaking). This business became successful. Some years later, another Trossingen clockmaker, named Matthias Hohner, visited Messner and Weiss, and learnt their harmonica construction technique. He then began his own harmonica business.

Matthias Hohner was apparently not a very good harmonica player, however he was an excellent businessman. He bought out his competitors, and in 1862 began exporting harmonicas to the United States, which soon became his largest market. Hohner continued to expand the business, and in 1900 he handed it over to his 5 sons.

Throughout the first half of the 20th century, the popularity of the harmonica continue to grow. In particular, harmonica bands, with many people playing together, were very popular. The Chromatic harmonica, which include a buttom on the side, allowing all notes to be played, was developed by Hohner. In the 1930’s, Larry Adler became the most famous player of this instrument, and remained so until his death in 2001.

In the United States, the harmonica became very popular as a blues instrument. In the 1930’s and early 1940’s a man named John Lee "Sonny Boy" Williamson became well known. After the second world war, Chicago became a major centre for blues, with great players such as Rice Miller (Sonny Boy Williamsom II) and Little Walter. Many people consider Little Walter to be the greatest blues harmonica player. He died in 1968, a sad day in the history of the harmonica.

While the harmonica has been known mostly as a blues instrument, many people were introduced to the harmonica in the 1960’s through the folk music of Bob Dylan. In recent years, great players such as Kim Wilson and Rod Piazza have continued the blues harmonica tradition, drawing on its history while moving it forward. Also, players like Jason Ricci and John Popper have developed new and exciting harmonica styles.

Throughout its history, most of the great harmonica players have come from the United States. However, the Internet is helping to introduce the harmonica to the world. The next generation of great players could come from anywhere.