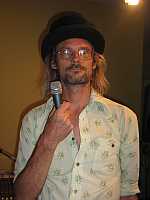 Andrew Clermont is one of Australia’s best know acoustic musicians.. He travels Australia and the world, adding his fiddle, mandolin, guitar and other musical skills to a wide range of performance and recording projects. He is based in Kootingal, in northern NSW. Kootingal is near Tamworth, home of Australia’s biggest country music festival every year in January, and the “Andrew Clermont Supper Club” is a well established festival highlight 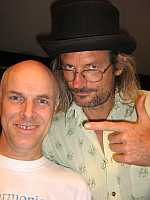 I have known Andrew for more than 25 years. He was a frequent guest with “The Full House Blues Band”, my 1980’s Adelaide based blues outfit. Like myself, Andrew started as a bluegrass player, and our musical paths have crossed frequently over the years 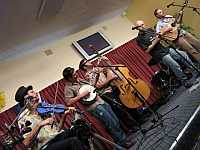 In particular, Andrew and I played together for some years in The Lawnmowers. This picture shows us at Andrew’s Supper Club in Tamworth 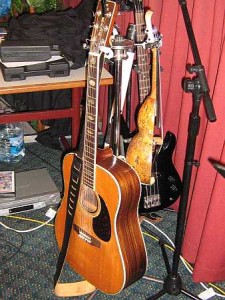 As master of ceremonies at the Supper Club, Andrew wield’s a variety of instruments, which reside on this multi-purpose stand when not in his hand. He also controls the sound, video and orchestrates the (many) players who attend.

The Tamworth Country Music Festival runs for 10 days, each night Andrew’s Supper Club has a different theme, one of them being “Hot Harmonicas”. 2009 “Hot Harmonicas” featured Christian Marsh, Lawrie Minson and myself. The video below is from the show, with Andrew on guitar and me on octave harmonica.