My brother Quentin Eyers, on the left in the photo, is a very fine musician, who lives in Adelaide, Australia. He owns a recording studio called Q the Music. The Black Mountain Harmonica CD was recorded at this studio. I often play music with my brother. Here is a video of us playing a tune called Caledonia.

The picture below shows me at a recording session in my brother’s studio. The microphone in the picture is a very high quality one, called a "Neumann". 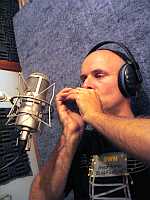 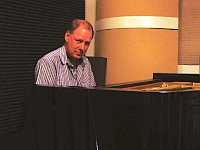 Quentin has many fine instruments in his studio. The picture on the right shows him playing his Yamaha Grand Piano. 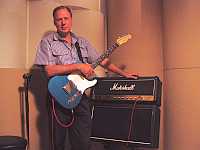 When working in his studio, Quentin often uses a keyboard and a computer to compose music, as shown in the photo here. 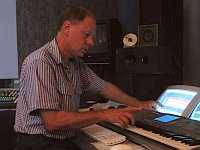 As well as recording the music my Black Mountain Harmonica CD, Quentin also played guitar, bass and percussion. You can hear his guitar playing in the tune George Brabazon’s Second Air.